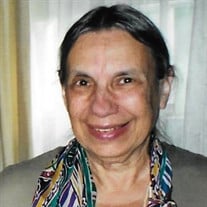 Barbara Nickolich (11/19/1926 - 2/9/2019) died peacefully in Charlotte, North Carolina on February 9, 2019. Barbara was predeceased by her parents, Thomas L. Nickolich and Julia (Barbaric) Nickolich, as well as her nephew, Tommy E. Nickolich. Barbara was born in Fairmont, West Virginia. After graduating from Fairmont Senior High School in 1944, she worked for 11 years at Armour and Company so that she could attend Wheaton College where she graduated in 1959 with a BA in speech. After graduate work at Northwestern University, she taught speech and theatre at St. Charles High School and Wheaton College in Illinois. She spent most of her adult life in New York City where she got her PhD in theater at New York University and where she taught at York College. Barbara truly loved New York for all it had to offer culturally and soon became a real New Yorker with a tinge of West Virginia in her voice when she became tired. Barbara was a gifted teacher and theater director. Her productions of theater classics at York College were amazing. It was marvelous to see the high caliber of performance she was able to produce, often with students whose native language wasn’t English. Especially highly acclaimed was her original annual production of 'Callalou', in which students performed renditions of music and literature from their very diverse multi-cultural heritages. She was an active and creative chairman of the department of fine arts at York College until her retirement at the age of 82. Barbara is survived by her brother, Thomas L. Nickolich, Jr. (Suzie) of Fairmont, WV; nieces, Mary Beth Nickolich of New Bern, NC and Martha Polizzi (Jim) of Weddington, NC; great niece and nephew, Maria Polizzi of Raleigh, NC and Zachary Polizzi of Menlo Park, CA, as well as many cousins. She was a loving sister, aunt, great aunt and friend to many. She took great joy and pride in the lives of her nephew, nieces, great niece and great nephew. Besides being missed by her family she will be missed by her many students and colleagues she inspired. Per her wishes, her cremains will be buried in Woodlawn Cemetery in Fairmont, WV. A family graveside service will be held at a later date. The family would like to thank the staff at Brookdale Weddington Park Assisted Living, Pietro Rondinelli at Ortho Carolina, Dr. M.R. Bolouri and his staff at the Alzheimer’s Memory Care Center and Hospice & Palliative Care Charlotte Region for their compassionate and loving care. Simply Cremations of Charlotte is serving the family.

The family of Barbara Estelle Nickolich created this Life Tributes page to make it easy to share your memories.