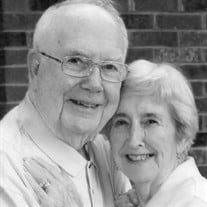 James Edison Fosbrink, born on April 11, 1922, left this world for the Lord’s loving arms on Wednesday, March 16, 2022, just weeks shy of his 100th birthday. Jim, Jimmy, Fuzz or Dad as he was known by family and friends left us just one day before what would have been his wife Patrica’s 99th birthday. He left us just in time to celebrate with his forever dancing partner and love. Jim left this world as he lived his life, on his own terms. He will be deeply missed and forever in our hearts. Born in a coal mining town in western Pennsylvania to May Balsley Fosbrink and John Fosbrink, he was the youngest of five. Jim rode his bike delivering telegrams for Western Union. Jim graduated in 1940 from South Union High School and quickly entered the Auto Mechanics program at the National Youth Administration (NYA) Trade School in Shippensburg PA. After making new friends and getting life experience under his belt, he followed his dad’s footstep and worked for the Pennsylvania Railroad as an Oiler and Car Repairman. In 1943, he enlisted into the military and served in the U. S. Army – Air Force as an Aircraft Mechanic. After receiving an Honorable Discharge, he married his dancing partner from the USO, Eileen Patricia Mix, on March 2, 1946. Jim worked for the Ford Motor Company and Hartfield Healy Supply Co. both in Buffalo NY, until being called back in service during the Korean Conflict. He was stationed in Washington, DC serving as the Chief Clerk, Air Force Aid Society, Bolling Air Force Base. Following a second Honorable Discharge, Jim landed a position with National Gypsum Co. During his career with the company, he was an Expediter, Assist Buyer, Expediting and Clerical Manager and a Buyer. He served as the Treasurer for Humboldt Parkway Methodist Church and was a key player in securing the land for and the building of Sweet Home Methodist Church in Amherst, NY. Jim was a Cub Master and Boy Scout Leader for Troop 180 at the Salvation Army on Westminster Avenue, Buffalo NY. He led the troop to several summer camps in western New York and an international camp, Northern Lights in Minden, Ontario. He was a member of the Order of the Arrow with the rank of Brotherhood. Jim and wife Pat moved to Charlotte NC in 1978 with National Gypsum. They loved adventuring out into the Blue Ridge Mountains and small towns surrounding Charlotte. As Yankees, they learned about the Southern way of life and found acceptance among neighbors who became new life-long friends. Upon retiring, Jim became a founding member of the Trailblazers, an organization for retired employees of the National Gypsum Company. During retirement Jim was discovered and pursued a career in the movie industry. He appeared as an extra in a variety of productions. Jim had the distinct honor of being a stand-in for Andy Griffith in “Matlock” and Morgan Sheppard in “The Lottery.” He worked with actors including Whoopi Goldberg, Patrick Swazey, Cicely Tyson, Rachel Ward, Terry O’Quinn and George Wendt. Also in retirement, Jim pursued the academic study of photography and writing. He adeptly turned his natural abilities and course experience into a retirement career as an author. He has been published in Readers’ Digest, Coal People and Pennsylvania, Reunion, Grit Magazines and Plus Magazine of California and Senior Magazine of Phoenix. In 2010, he self-published a collection of his works in a book entitled, My Days on the Extension and Other Tales. This book recounts memories of his life and fun times growing up on the Extension, Uniontown PA. The book is available for purchase on amazon.com. In the day, Jim loved a round of golf with work and neighborhood friends. It was an especially good day that he sunk his first and only hole in one! It was hard for him, as his body began to hurt, to leave the enjoyment of friendship and sport at the links. Jim served as the neighborhood handyman and household fixture problem solver. Jim’s number was on the neighbors’ speed dial! Jim and his good friend Joe Snyder were active members of the “Old Fogies,” a neighborhood group of men who collected holiday gift boxes of needed goods for the homeless and served up a Christmas Eve meal at a local downtown Charlotte shelter. Dale Brook, a dear friend and companion to Jim in the last few years, came serenading to raise Pat’s spirits when she became ill and later became a regular singing companion with Jim. They sang in person and then, when it became difficult for both, would have a nightly Facetime visit and sing-a-long. We know Dale was there with one of his playful hats on head and guitar in hand to sing Jim through the pearly gates. Jim is survived by his daughter Barbara, son Gary and his wife Carol, and multiple nieces and nephews. This notice would be remiss if it failed to recognize their North Carolina “extended” families that grew to love both Pat and Jim, and who offered loving care and attention to hold them safely as they moved through their final months and days. With gratitude to these families: Anne Hollowell and Mark Hollowell (Deceased) and Benita and Jim Bryson. Burial, for both Jim and Pat Fosbrink will take place later in 2022 at Mount Olive Cemetery, Connellsville PA in the Fosbrink Family plot. In lieu of flowers, please consider making a donation in Jim’s name to the Fayette County Historical Society to assist with their library and research program. PO Box 193, Uniontown PA 15401. The Historical Society will be accepting Jim’s papers into their document collection. Jim’s written works will be available for research and exhibition. Together Lord, we commend his Spirit into your hands. Keep him safe and surround him with Your unending love and comfort. Jim/Dad will always be in our hearts.

James Edison Fosbrink, born on April 11, 1922, left this world for the Lord&#8217;s loving arms on Wednesday, March 16, 2022, just weeks shy of his 100th birthday. Jim, Jimmy, Fuzz or Dad as he was known by family and friends left us just one... View Obituary & Service Information

The family of James Edison Fosbrink created this Life Tributes page to make it easy to share your memories.