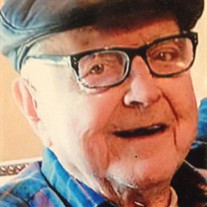 Mel Akery Melton (Mel) Akery, 86, of Chesterfield, Virginia, passed away on Tuesday, Oct. 29, 2019. Mel was residing in Charlotte, North Carolina at the time of his death. Mel is survived by his children Chris Akery (Hope), Jim Burns (Elaine) and Donna Pham (Vu), his grandchildren Matthew Akery, Cory Spiers (Ellie) and Ashley Tremper. Sisters are Josie, Sue, Nellie and Mildred of California. Mel was preceded in death by his parents Fred and Tessie Akery, former wife Dorothy (Dot) Akery, brother Manley and daughter Bonnie Andresakes. Mel was born in Alabama and grew up with five siblings. From his humble beginnings, he went on to serve the United States Army in Korea before establishing a successful carpentry career. His skill and talent earned him a reputation as a hard worker and a kind-spirited man. Mel was well known as the patriarch of his cul-de-sac. He enjoyed visiting his neighbors, woodworking and carpentry projects. Mel also shared a love of gardening with his son Chris. Many special moments were shared by the father and son duo who spent numerous years sharing their mutual interests. Mel was known for sharing his homemade pickles and tomatoes. He enjoyed the company of friends and family. Mel exemplified his Christian faith through kindness and good deeds. He was a member of Salem Baptist Church in Chesterfield, Virginia. A memorial service will be held at 11:00 am on Saturday, November 16, 2019 at the church. The family would like to thank Pastor Leonard Saunders, his wife Norma, the dedicated church members and friends for their unwavering support over the years. In lieu of flowers, donations may be made to Salem Baptist Church 5930 Centralia Road, Richmond, Virginia 23237. Attachments area

The family of Melton Junior Akery created this Life Tributes page to make it easy to share your memories.