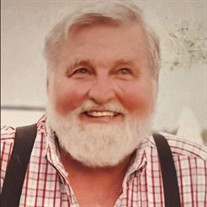 Milton “Big Dale” Eramo, 77, sadly passed away on Monday, February 21, 2022 surrounded by his four children and his loving wife. He battled renal failure for 11 years with a consistently positive outlook and zest for life. His final battle was with lung cancer. Dale was born July 22, 1944 in Concord, NC. Dale was the son of the late Virginia Edwards Eramo and the late Thurman Milton Rowland. Dale was raised on his grandpa’s farm where he learned the value of hard work. His cousin, Joey recounts how much joy and excitement he brought to everyone he encountered. Dale was an awesome basketball player who “should have gone pro”. However, he decided to serve his country in the United States Army. Dale served as a Decoder. The most notable decoding achievement was President Kennedy's assassination while stationed in Europe. He constantly recounted experiences in the Army pivotal to shaping his character. He was a proud to be a Veteran. Dale is a Carolina Tarheel fanatic even though his son was a graduate from NC State. He enthusiastically coached his daughter's softball team for nine years and had fond members of this time of his life. Dale’s career days were spent in food service. He was a manager at Shoney’s restaurants in the surrounding Charlotte area. His extraordinary charisma led him to food sales. He always said "Don't hire a salesman if they don't carry a pen". Understanding the industry on all levels, he was known for treating his customers like family. When he retired from food sales, he had developed many lifelong friendships with colleagues and customers alike. In retirement, Dale was an avid reader of anything he could get his hands on and a college sports enthusiast. He loved spending time outside gardening, maintaining his koi pond and his large freshwater aquarium. He had a passion for enjoying nature in its entirety. His love for his family was touching - he always wanted to hear from his children and loved when his wife would just be sitting beside him. At age 69, Dale took up his second career as Santa Claus at Randy Simpson’s Tree Farm in Indian Trail. He didn't have an option as the likeness was uncanny. He was able to be a part of children’s Christmas traditions for eight seasons. His role as Santa filled so many people with joy, this too brought him so much happiness. He was able to be a part of birth announcements, wedding photos and family photos. We are so filled with great pleasure knowing that he will live on forever in people’s memories and on their mantles. Dale is survived by his loving wife of 43 years Gloria Wilson Eramo, his children, Denna (Travis) Fillman, Dana (Robert) Strickland, Dale Eramo II and Alyssa Eramo. As he, is a true believer we know in our hearts we will be reunited with him in Heaven. Dale was a loving husband, father, generous friend and a true gentleman. He will be sorely missed by the "Wilson clan" and his large extended family which has been a part of his daily life with countless memories he treasured. We would like to extend our deepest thanks to the Fresenius Kidney Care Matthews for their superb care of “Big Dale”. We also would like to send a huge thank you to his Nephrologist, Dr. Edwards Fisher and his Pulmonologist, Dr. Christopher Russell. We would like to express our gratitude to Lee Park care team lead by Pastor David Price on the many prayers and communication with Dale through out his many health challenges. A Celebration of Life will be held Saturday, April 2, 2022 at his home in Indian Trail, NC at 1:00pm. Service will be lead by Lee Park. We will have parking at the clubhouse and transportation to the home, as honoring him in his back yard sanctuary is where it feels right. With any questions, please message 704-576-4529 or e-mail [email protected] In lieu of flowers, memorials can be made in Dale’s honor to the Kidney Foundation. Kidney.org

Milton &#8220;Big Dale&#8221; Eramo, 77, sadly passed away on Monday, February 21, 2022 surrounded by his four children and his loving wife. He battled renal failure for 11 years with a consistently positive outlook and zest for life. His final... View Obituary & Service Information

The family of Milton "Big Dale" Eramo created this Life Tributes page to make it easy to share your memories.