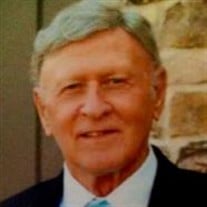 Ray Fretz, 79, of Charlotte, faithful father, husband, grandfather, uncle, brother, and friend, died suddenly of a massive heart attack on Saturday evening, October 18, 2014. Born in Akron, Ohio, December 10, 1934, Ray rose to fame as the first four letter athlete from Ellet High School. He served in the U.S. Army, and worked at General Tire for sixteen years. After moving his family to Charlotte, NC, Ray worked with United Insurance for 25 years, and then crooned his way through the nightshift at Harris Teeter for 19 years until Friday, October 17. Ray walked with God everyday of his life. Though raised and affiliated with the Nazarene denomination most of his life, Ray faithfully attended the Central Church of God for the last 28 years. As a member of the Calvary Nazarene Church in Charlotte, he devoted himself to service by singing in the choir, serving as an usher, on the church board, and playing key positions on the ball teams. Ray also began and maintained a successful bus ministry that brought children from lower income areas who had no other way to get to church. Aside from work, Ray was crazy in love with his family, an avid golfer, had a passion for ball, work and war movies; he spent his last days enjoying all these favorite things. Ray is survived by wife Carol, sons Steve and Scott Fretz; grandchildren Steven Fretz, Lauren Moore, Ashley Jennings, Josh and Matt Fretz; great-grands Alivia Hatcher and Blayke Moore; eight nieces and 3 nephews and their children. Ray is preceded in death by his parents Harry and Lois Fretz; brothers, Don, Dale, and Paul; and daughter-in-law Bonnie Fretz. A celebration of Ray's life begins on Saturday, October 25, with a visitation from 1:00-2:00 PM and a memorial service following the visitation. These events will be held at the Central Church of God, Family Life Center, on 5301 Sardis Road in Charlotte NC 28207. Simply Cremations of Charlotte is serving the family of Mr. Fretz.

The family of Ray Dean Fretz created this Life Tributes page to make it easy to share your memories.