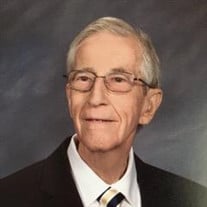 Robert W. (Bob) Fuller, 91, formerly of Westminster Drive, Greensboro, NC died in Charlotte, NC on October 15, 2016. A memorial service will be at 1:00 pm on Tuesday, October 18, 2016 at Christ United Methodist Church of Greensboro, with private inurnment in the future at Westminster Gardens Chapel Mausoleum. Born May 11, 1925 in Cumberland, MD, he was the son of the late Arthur and Ethel Powell Fuller. Brothers James and William predeceased him. From 1967 Bob was a Greensboro resident and an active member of his church, where he was an usher, greeter, teacher, youth counselor and all around volunteer. An electrical engineer from Georgia Tech and the University of Louisville, after 44 years of service he retired from Square D Company as Carolina Sales Manager. Bob was a Professional Engineer and officer of the Professional Engineers of NC North Piedmont Chapter. Earlier he was active with American Facilities Engineers, the International Association of Electrical Inspectors, Sales and Marketing Executives and as a literacy tutor. Bob was a senior life member of the International Electrical and Electronics Engineers where he was Man of the Year of the Textile Fiber and Film Committee in 1987. He was Man of the Year of Greensboro Sertoma Club in 1971. Bob volunteered at Greensboro Urban Ministry Potters House and Senior Resources Senior Wheels. Bob was a Navy lieutenant and served on the USS Purdy DD734 in WWII and at Naval Ordnance Supply Office during the Korean War. He was predeceased in 1997 by his wife of 50 years, Carolyn Robinson Fuller. They met at Allegany High School, Cumberland, MD. He is survived by daughters and sonsin-law: Linda and Richard Hagemeyer of Charlotte, Celia Fuller and husband Thomas Shown of Raleigh, Robin and James Foust of Rock Hill; and survived by son Robert A. Fuller of Hopewell, NJ; nine grandchildren, seven great grandchildren; and Gerry LeBrun, of Greensboro, his constant companion since 1999. The family will receive visitors immediately following the memorial service at Christ United Methodist Church in Greensboro. Memorial contributions in lieu of flowers may be made to Hospice & Palliative Care Charlotte Region (www.hpccr.org, 704-375-0100); Aldersgate Retirement Community of Charlotte (www.aldersgateccrc.org, 704-532-7000); or Christ United Methodist Church, 410 N. Holden Road, Greensboro, NC 27610. Simply Cremations of Charlotte is serving the family of Mr. Fuller.

The family of Robert Wendell Fuller created this Life Tributes page to make it easy to share your memories.